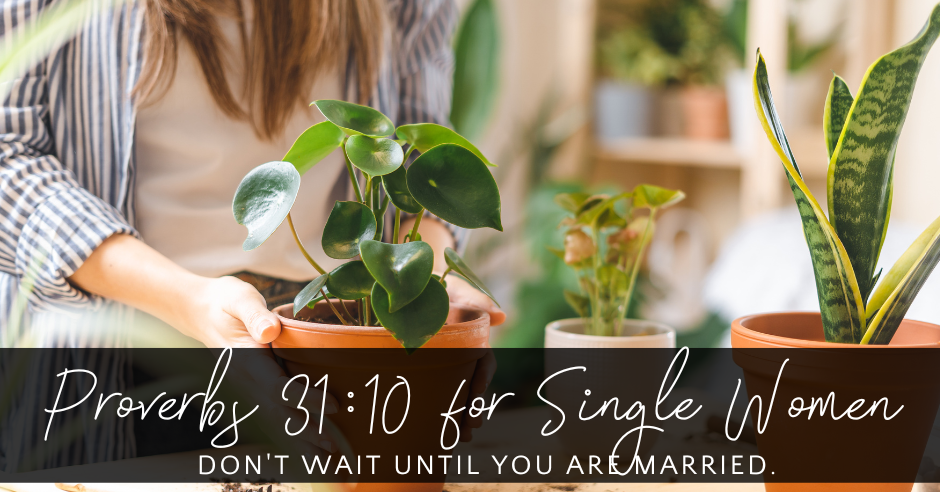 This is a guest post by Lisa Plank. You can find this article in the January/February 2023 Issue 10 of Torah Sisters Magazine.

Proverbs 31:10 “Who does find a capable wife? For her worth is far more than rubies.”

In the first part of this verse, Who does find a capable wife, it sounds like this woman is already capable before she is found. That means we have to start as soon as possible, not waiting until we are married or right beforehand – the time to be “capable” is now.

Ladies, in this season of singleness we have an awesome opportunity to put into practice the art of becoming a Proverbs 31 woman. Our Heavenly Father and our society need more of you in this world!

Capable in Hebrew is chayil, the same word used by Boaz to describe Ruth. Chayil means a lot of things, including strength, valor, virtuous, and warrior. What a beautiful way to describe how women need to be! Is this not how we want to be thought of before and after marriage?

A valiant, virtuous warrior. It is amazing to me that the same Hebrew word used to describe a capable woman is also used to describe men in Exodus 18:21 “… seek out from all the people, able men, who fear Elohim, men of truth, hating unfair gain…” From this context, able or capable sounds like it’s describing a spiritual maturity, one who fears Elohim, loves truth and hates unfair gain. Could this be used to describe a Proverbs 31 woman too? I think so! A valiant warrior woman sounds exactly like someone who fears Elohim, loves truth, and hates unfair gain. Sounds courageous, righteous, and adventurous! Nothing boring about being a valiant virtuous warrior!

Now let’s go back and take a closer look at the practical day to day of being a capable woman. If we look at capable in Webster’s Dictionary it says: able to do things well; skilled; competent. How can we apply these descriptions to our lives during a time of singleness? All three of these go hand in hand.

First of all, if we can do things well, this means it takes time to practice and master them. Webster’s Dictionary says a skill is attained by special experience training, so once we’ve put in the time and effort, our competency in those skills will grow. For me, this means doing things now, those things that I always envisioned being skilled in and doing some time in the near future, but never actually getting it accomplished.

For example, I have always dreamed of having a cottage-like garden off my back patio someday. I envision I would walk out my back door, off my patio, through the gate leading to my garden, and there I would have all kinds of herbs, roses galore (because I would know how to take care of them), and a plethora of other flowers blooming in a riot of color, with delightful paths going through the garden. As far as I know, I won’t be having my own house soon, so I have decided to stop thinking “temporarily” and start thinking more “permanently”. I am currently in the process of planting perennials in my garden plot, instead of the flower seeds I plant and then gather every year. Roses are on the top of the list because I want to learn how to take care of them. So far, I have 14 rose bushes and I can’t wait to see them bloom. I can always dig them back up if I want to move them (if they’re not too big by then). Cottage gardens often have gates but I don’t think I’ll be able to have gates by my doorways, so I’m planning on putting arches over them with climbing flowers to give it the cottage garden feel. And I also made room to be able to put a bench in the middle of the garden, for a quiet retreat from the daily grind. It’s so fun to see how creative you can be with any skills you put your mind to!

What are some skills needed as a capable woman and wife? Are we spending our time learning as many skills as we can and practicing the ones we know? When I think of a capable woman, I think of being knowledgeable in the basics like cooking, baking, & cleaning. Other skills would be sewing, management, budgeting, and communication. What about the attributes of a capable woman? I think of good work ethics, efficiency, organization, ambitiousness, etc.

With regards to being competent as part of being a capable woman, it means well qualified: fit, sufficient; adequate; properly belonging; legally qualified, and authorized. Wait, what?! Legally qualified? Authorized? You’re probably thinking, no way! The standards are too high! How can we ever measure up? (sigh) This woman must be perfect!?

But just think! If YHWH allowed this to be put into Scripture to be used to describe the woman Solomon’s mother encouraged him to marry, as well as describing Ruth (and a few other women), then shouldn’t it stand to reason it was put in us women to BE this kind of woman? If this is true, and I believe it is, this means our Heavenly Father YHWH put it there! We were born authorized, legally qualified, and sufficiently adequate by the King of the Universe. And you properly belong in the role YHWH has for you, sister! Whether you are single or married. You are well qualified, you are equipped. So don’t stuff your gifts, talents, and abilities in the closet. Neither leave them on the shelf, where they are seen but not used. Blow the dust off and start putting them to use!

If we don’t use our gifts, talents, and abilities, could this be compared to the servants who were given talents? Two of the servants multiplied what they received, and the third went and buried his, because of what? He thought the Master to be harsh. He was afraid and didn’t trust Him, so he buried his talent. He did nothing! He played it safe. Fear crippled him. No risk. No gain. The wicked and lazy servant was thrown into outer darkness where there was weeping and gnashing of teeth.

The second part of this verse tells us that her worth is far more than rubies. How precious are women like this? We know there have been thousands of dollars spent in buying or finding jewels, people have traveled to the ends of the earth for a promise of a rare jewel, and even murdered to get to the jewels, but we, as Proverbs 31 women, are worth more than all that! Isn’t it amazing? In Psalms 12:4 “A capable wife is the crown of her husband, But one causing shame is like rottenness in his bones.” Do we wish to work towards being the crown, an honorable role for our husbands, or will we bring dishonor to him by remaining incapable?

As you go through each day to live your life for the Father, you are a capable woman. All the little things we do to learn and “better” ourselves is being a Proverbs 31 woman.

Ladies, do not underestimate your worth, the ability to learn and have skills, as well as the power you hold to create (or not create) a restful home for your family!

My name is Lisa Plank. I live with my parents and 4 sisters on a lovely 57 acre farm. We have lots of animals – cows, horses, sheep, chickens, ducks, dogs, and cats. (Have I forgotten anything?!) Although our life is busy and sometimes hectic with running our family-owned business building custom kitchens, we, as a family are passionate about homesteading and the simple things in life. When we’re not making kitchens you can find us in our gardens, sitting on the porch, with the animals or simply enjoying the great outdoors.

This site uses Akismet to reduce spam. Learn how your comment data is processed.